The Sharpest Blade you will ever see 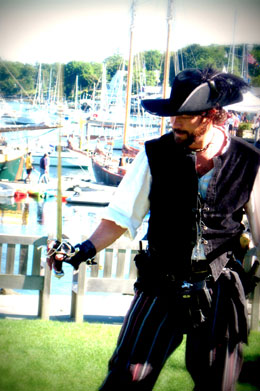 Grandson of a granite quarrier, son of a teacher and wood worker; Fenris is knowledgable of trade and business. Seeking his fortune he left coastal Downeast for Boston. With hopes of wealth and traveling the world, he spent years working aboard merchant vessels. Fen's travels were mainly to and fro the west indies, trading cargo and portage. Business was profitable and Fenris rose quickly in the vessels ranks. Transporting a cargo of tobacco and alcohol from Boston his vessel was overtaken by the Must Roos and her crew seeking an easy plunder. A barrage of cannon balls and small arms ensued. The hired deck hands fell quickly or abandoned the ship to the icy waters. Undefended the ship was easily boarded. Goading the pirates that he could be of some "benefit"; Fen joins the scalawags of the Dark Rose. Fen was subsuquently taught the ways of blades, cannons, and flintlocks and assists in acquiring booty and fencing plunder.