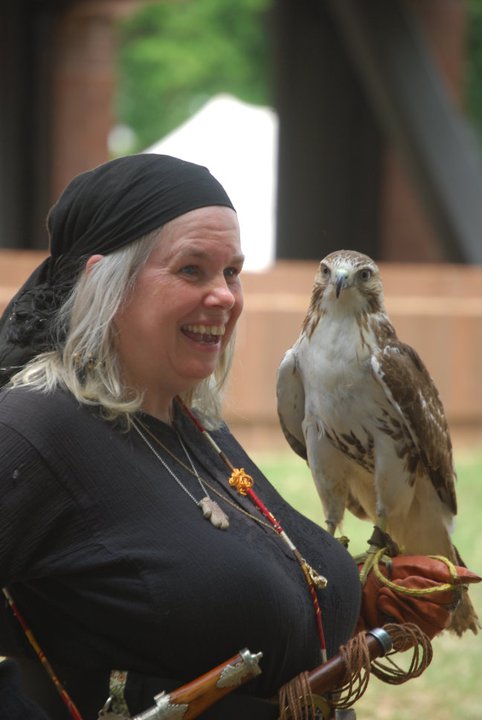 "TheGershere" poisoner or ruiner. Fox was raised in a small village in a forested area. She was raised by her grandmother. As a child, Fox's father went to sea to seek his fortune for the family but alas, he never returned, leaving Fox's mother to tend to 3 small children of her own with no means. She became the local laundress and seamstress for the villagers. Fox was a curious child and always at her grandmothers side. Her grandmother was known as the healing woman in her village. Fox was always with her grandmother in the woods seeking flower and fauna and creating herbal healing concoctions. Fox was fine apprenticeand learned to use this knowledge as either benevolent or monovalent.During this day and age this knowledge was considered witchery in the hands of a woman. If it were to be known to anyone outside of the village that Fox was an herbalist, she could be tried and burned at the stake for witchcraft. One time a stranger came upon the village he was seeking healing physician's herbs and went to seek out Fox for healing. The man mysteriously perished whilst in her company. Bidden by grandmother to escape before the magistrate sought her out, Foxmade her way to the coast, cut off her hair, dressed in men's trousers and was hired aboard onBritish Merchant Ship "The Silver Swan" as a cabin boy heading anywhere, away from inquisition, away from all she knew and loved. While at sea the British Merchant ship was overcome and attacked by the Sakr-El-Bahr-Hawk of the SeaABarberry Corsair. All crew that was not killed was taken aboard and thrown into the galley. Fox was thrown into the galley with them. The Corsair Reis had taken a lead ball in his leg and within days he became ill with fever. The whispers among crew that the Corsair Reis would surely die prompted Fox to step forward and claim her knowledge as an herbalist. She called for herbs to be brought from the galley. She made a poultice and brought the Reis back from the brink of death. After that Fox was considered valuable and was and was kept by the Corsair Reis instead of being sold into slavery. He finds that she is not only a healing physician able, willing and loyal to serve the Reis, She tested her hand at weaponry, cannons, and firearms. There Fox served the Corsair Reis until another bloody battle upon high seas. As The Must Roos came alongside the Hawk of the Sea, cannon fire ensued. Fox stood fast beside the Corsair Reis ready to die for her loyalty. She raised her sword and her pistol and joined the fighting and when the smoke had finally cleared the Corsair Reis lay in a pool of blood, dead eyes staring blankly into the sky. Any corsair left alive after the fighting either took their own lives or jumped to the waiting sea to avoid being taken by infidel dogs. Contact Fox