The Fight Coordinator for the Crewe 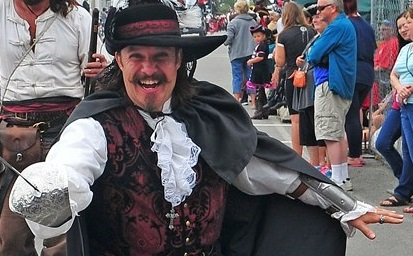 Born the son of a wealthy Spanish merchant and land owner, Don Jaco Santiago grew up in privilege and excess. He enjoyed the finer things in life, expensive clothes, an education, pampered and lavished. As a proper nobleman, His father insisted he learned the use of a sword and duelist tactics. While out on a ride through the villages He met and fell in love with a peasant girl and, against the wishes of his Father, married her. Disinherited and stripped of his wealth he was forced to join the Spanish military to provide for his new bride. After being away for a period of months battling the English, he came home to find her in the arms of another man. Enraged and heartbroken he fell into the bottle and drunk himself oblivion. After a long senseless stupor he awoke to find himself at sea, in the company of "The Pirates of the Dark Rose". Aboard the "Must Roos" he was befriended by "Crudbeard", who taught him the ways of Cannon and Cutlass. Now Santiago is the appointed Blade Capetian and sails the seas as part of the "Must Roos' " crewe, ship against ship, port to port, leaving a swooning Giselle and Scarlett in his wake. Contact Santiago