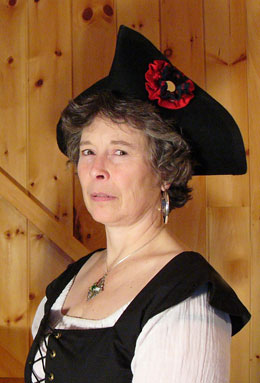 Sally Shaw was born at sea, the daughter of a Scottish pirate captain and his ocean-going Irish mistress. Having been born aboard a pirate ship, she has been a pirate since birth, and often loudly proclaims "I owes allegiance to no man, country or king." Raised in the Sweet Trade of piracy, Sally learned well the art of the sword and joined in her first sea battle at the age of 14 years. By the age of 16 the pirate crew voted her in as bo'sun, and by the age of 20 she was commanding her own pirate sloop, seeking prey on the leeward side of the Caribbean. Never once did she endure a foul word or venturous touch from a male pirate at sea or ashore. Such circumstances usually led to a quick and decisive settlement that left the male pirate with sword or knife cuts in the most painful of places. Her unflinching attitude led to her crewmates to dub her "Sassy," a title which (fortunately for the crew members) Sally enjoyed enough to take on as part of her name. Capt. Sassy Sally inherited her father's love of Scotland, even though she had never touched the Scottish shore. Following his death during a raid on the Spanish Main, she took up his sash with the family tartan and added these colors to the cockade on her tricorn hat. On a shore leave in Port Royal she met Bloodthirsty Barbara and the two became fast friends, terrorizing both men and maids. Giving up her captain's position, she threw in with the crew of the Dark Rose Pirates, where she grudgingly allows Capt. Crudbeard to run the show.Contact Sassy Sally