Mayhaps the pen is mightier than the sword. Mayhaps not! 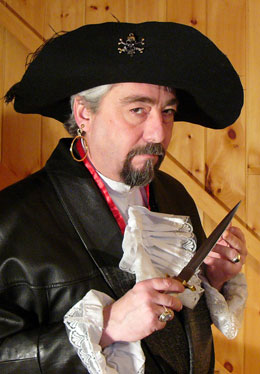 THE PIRATE "SCRIBE." Never knowing the comfort of home, or even a family name to carry on, the Scribe spent his wee years as a street urchin in the alleys of London - scratching, stealing and fighting for a living. He learned well the silent art of the knife, and became more than proficient with the small sheath knife he carried, able to defend himself from the largest and most aggressive of attackers with a quick flip of the blade. He found his only sanctuary with a kindly pastor who taught him to read and write passages from the Bible. One cold night, a gang of five street thugs broke into the church seeking cash from the collection box. When the pastor tried to stop them, he was beaten to death with fists and cudgels. The pastor's bloody body was found the next morning by his young reading student, who immediately took to the dirty streets in search of the killers. Several days later five bodies were found at various locations in the city, their throats slit ear to ear by someone awful handy with a knife. At the about the same time, a young lad who called himself Smith, with only a Bible, a sheath knife and the clothes on his back, shipped out on a merchantman bound for the Ivory Coast of Africa. After successful trading stopovers, the merchantman followed the prevailing westerlies across the Atlantic to the Caribbean, where the ship was taken by pirates. As the pirates started throwing the merchant crew overboard, the young man named "Smith" convinced the buccaneers he was a surgeon's mate. Since the pirates had no surgeon of their own, and they had already tossed the merchantman's surgeon into the sea, they decided to spare the young surgeon's mate life, and bring him into their crew. Clearing the surgeon's bookshelf of medical books, grabbing the surgeon's tools, and arming himself with the surgeon's cutlass and pistol, "Smith" joined the pirates. Concerned that he may actually be called upon to perform surgery, "Smith" busied himself with the surgeon's medical books, taking notes furiously while the pirates watched with curiosity. After a time, the mostly illiterate pirates began to call him "the Scribe" for all the notes he took and reading he did. The name stuck, and the pirate Scribe was born. Perhaps most importantly for the pirate crew was that some weeks later the Scribe's reading and note-taking paid off when a number of buccaneers were wounded after a Royal Navy ship pursued them, raking the deck with cannon fire as the pirates tried to run. Contact The Pirate Scribe