Enemy to Many, Hero to None 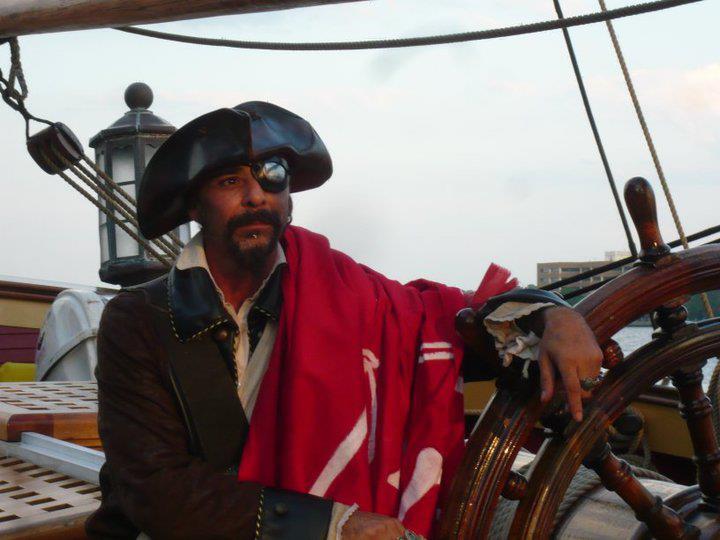 and his origins seem to defy explanation. It is said that a harlot of an indentured servant, on the way to Jamaica, after a difficult illegitimate birth, threw him overboard. A pod of dolphin played with the infant Spike, but quickly got bored and tossed him onto the first fishing vessel to come by. The fisherman awoke to a crying babe on deck, and took it as a sign. He was raised aboard a ship and quickly rose through the ranks to command a ship of his own. He decided there were more to the sea than fish, and wanted some of that glitter. And so began his privateer life under the flag of Great Britain. But after Queen Anne's War, he could no longer plunder as a privateer. He met Edward Teach, and took up the black flag of Pyracy. In a short time, he commandeered the ship, Bloodlust and sailed as Captain with the notorious Bone Island Buccaneers, plundering and raiding across the nine seas. Known for his skill with the cannon and cutlass, he led this crewe of freebooters and pyrats across the Caribbean, the name of the Bone Island Buccaneers was whispered in fear along the Spanish Main. A wanted man, barely escaping the hempen halter on many occasions, he took a letter of Marque from the Viceroy. But like his friend Edward Teach, he is always a Pyrat at heart. After meeting with the Pirates of the Dark Rose, Bloody Spike Pierce would use his letter to plunder and raid under a new flag. The Pirates of the Dark Rose, are feared and legendary, so Spike put his lot in with Captain Crudbeard and already raided new ports in New England with this bloodthirsty crewe. He is sometimes seen in the uniform of the Crown and others spotted wearing the black coat of a Pyrat. And if ye ask how he got his moniker, well he might sing ye a song about it. Contact Bloody Spike