Watch yer toes around this maneater. Ye may lose them ... 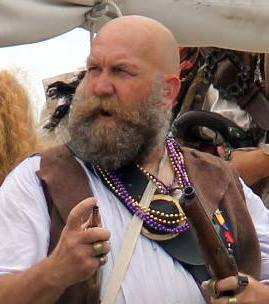 Out fishin one day in the ocean Syd threw his anchor over the side of the boat and right on top of a whale. Both were surprised. The whale spouted and ran off in a hurry. Syd caught the spray of salt water and foul air dead square in the face, which was not the most surprise he got. The anchor had caught in the tail of the whale. And when all the anchor line whipping over the rail had run out, the boat took off after the whale, which was surprising as Syd wasn’t rowing. Syd was in the water. But the boat dragged on one side of the whale’s tail and turned him in a circle so Sid caught his boat as it came around again. This was about the year 1715 and nobody had heard of roping a whale or invented harpoons so Sid didn’t know what to do except hang on. He was the first whaler to be pulled on a “Nantucket Sleigh Ride”. That whale pulled Syd all the way to the Figi Islands and got very hot in the exertion of it because the whale had to swim in curlicues to get there. The whale melted all his blubber and whale oil was floating all around Syd's boat so he scooped up and burned it for light at night. This mightily impressed the islanders, who hated to stop their tattooing when it got dark at night and so gave Sid the title of “Viskus” or master of grease. When a pirate ship stopped at the island Sid turned pirate to get off the island because the whale oil had all been used up and Syd had turned to boiling other things to turn the fat to oil so the natives would not become annoyed. The decline in the cat population was causing talk on the island’s coconut telegraph, and when Syd was found with fingers of captives in his possession his explanation was hardly convincing. So when the pirates found out about Syd Viskus’ expertise in things slimy and slick, he was taken aboard and given the job of greasing the mast with the pirate ship slush fund and squeezing the lard from the vessel’s operating budget. But Syd is best at convincing captives to tell where the treasure is. He just gets out his really big cauldron with the globs of fat around the rim. Contact Syd Viskus