When you prounce his name, accent is on the "Vice" 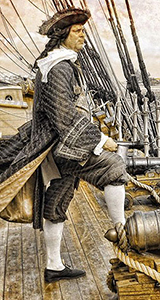 SIR LAWRENCE CAMPBELL comes from a country where men wear kilts and often take up the trade of artificer, blacksmith, or anything else involving making things of metal. In the case of the Viceroy, he started in a foundry, casting great cannons with fine detail. Although the wearing of the kilt did prove a problem when pouring the molten metal, Sir Lawrence quickly learned to bear the pain of the splashes of burning bronze on his handsome legs. This ability to withstand torture has enabled him to enjoy a kind of humor that unfortunately tends to generate cries of anguish, groans, and physical collapse in his listeners. Never-the-less, in spite of this, he managed to ingratiate himself well enough with the King to be knighted, although it was whispered that it was entirely due to the influence of the Queen as a reward for exceptional services of a personal nature. The British government, because of Campbell's ability with artillery in defense against pirates, ability to discourse at length without actually saying anything important, and the ability to place bribes in the right hands, made him a Viceroy to represent His Majesties' Government in hopeless situations where a scapegoat is required. Sir Lawrence quickly became adept at turning his coat and deserting to the other side with an ease and rapidity that would leave his erstwhile cannon crews dumfounded in astonishment. Thus it was that pirate Captain Crudbeard found himself firing his cannon in a battery Campbell commanded after Campbell had switched sides as usual. Taken with the excellence of the Viceroy's cannons and carriages, the Pirates of the Dark Rose offered Campbell a place in their crew, hoping to get good deals on cannons. Although this didn't actually prove out, The Viceroy Sir Lawrence Campbell still supplies most of the cannons used by the pirate crew. Contact The Viceroy